Two East African countries say U.S. President Donald Trump’s decision to recognize Jerusalem as the capital of Israel is “dangerous” and could spark an international crisis.

“We are urging the U.S. government to seriously reconsider the risks that its decision could have on the future of the Middle East and the world in general,” said a statement Friday from Somalia’s foreign ministry.

“We call for Arab, Muslim and other nations to redouble their efforts to find a solution to the Palestinian issue in order to end the crisis in the region,” said the ministry.

The government said it and the Somali people are prepared to support Palestinians’ struggle for their rights.

Neighboring Djibouti says it rejects the U.S. decision on Jerusalem. “This grave decision, contrary to international law and United Nations resolutions, is potentially dangerous insofar as it fears an escalation of tensions in the Middle East and beyond.”

“The Republic of Djibouti reiterates its commitment to the two-state solution, living side by side in peace and security with East Jerusalem as the eternal capital of the Palestinian state.” 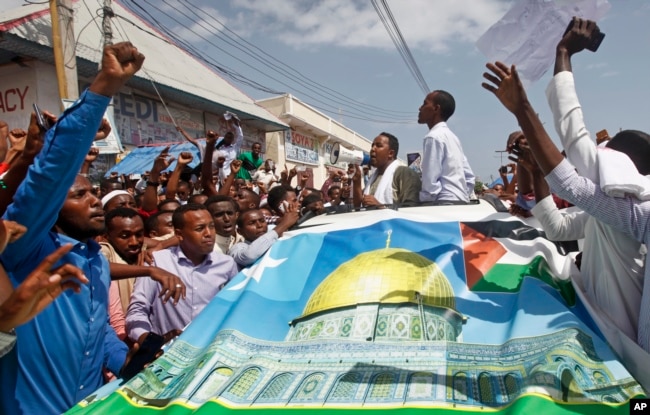