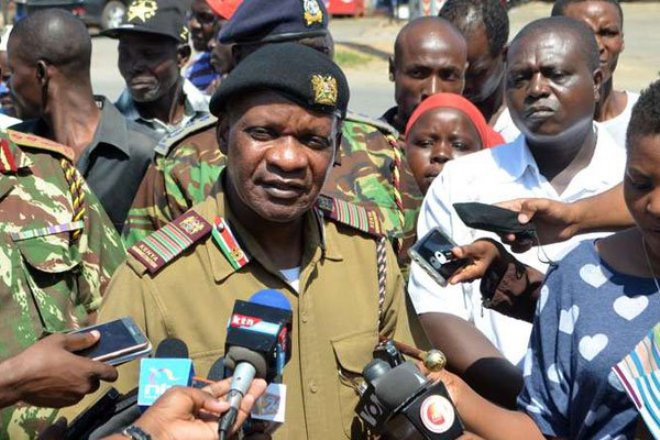 Coast Regional Coordinator Nelson Marwa has raised concerns about the security operation being carried out by the Kenya Defence Forces in Boni Forest.

Mr Marwa questioned why the operation in Lamu County, launched on September 15, 2015 to end terrorist attacks by Al-Shabaab militants, has not yet borne fruits as had been anticipated.

“We have the Operation Linda Boni in place. It is now almost two years and the way things are, it’s like we haven’t achieved the objective of flushing out criminals inside the forest.

“We need to see changes in as far as the security of this county is concerned or else we replace you guys,” Mr Marwa said.

The exercise was commissioned by the late Interior Cabinet Secretary Joseph Nkaissery and is being complemented by the National Police Service.

Speaking during a meeting with the county’s security bosses and residents at Mahrus Hotel on Sunday, Mr Marwa said interrogation should be done on why Shabaab is carrying out attacks despite the intervention.

He said it was unfortunate that the recent killings of four people occurred at Silini-Mashambani and Bobo villages, areas within the operation zone.

“The Linda Boni Operation has sufficient resources to secure Kenyans right from the border of Holugho, Kulbiyow and Ghalmagala down to Kiunga.

“How then do Al-Shabaab [militants] find their way past our forces …to get into villages, kill people and go back into the same forest or cross the same borders where our KDF soldiers are?”

He told the director, Mr Joseph Kanyiri, to make sure he delivers, saying that the national government will not tolerate incompetent officers.

“We have enough airplanes and I wonder why most of them are just lying in the bases instead of being put out there to patrol these places. People must be responsible to this course,” he said.

The Regional Coordinator asked for investigations into the conduct of all officers involved in the exercise, especially those in Hindi and Mokowe where the four people were killed.

“It’s unfortunate that the unit in Hindi where four people were killed is under the operation Linda Boni.

“Members of the public made prior reports to Hindi and Mokowe police stations but no action was taken until deaths occurred.

“There is need to find out who isn’t doing the work and pull them out. Such laxity is making the war on Al-Shabaab in the Boni Forest tricky and complicated than it should be.

“That’s why I demand investigation and a report submitted to my office soon,” Mr Marwa said.

Lamu West MP Stanley Muthama called on the national government to conduct mapping of all routes in the forest so that soldiers are able to track the militants.

“We need more access roads in Boni Forest. Once mapping is done, it will be easy for our security officers to trace the culprits in the forest.”